Many of us have had an animal we rescued from a bad situation, whether saving them from the streets, from a shelter, or a less than ideal living situation.  We speak for those who do not have voices and when we bring them into our lives, we realize that we were the ones that were truly saved.  There are so many animals in need of homes and so many of us that can benefit from the companionship they provide.  This week, we’re giving thanks to the wonderful animals in our lives, by sharing their stories from some of our fans. 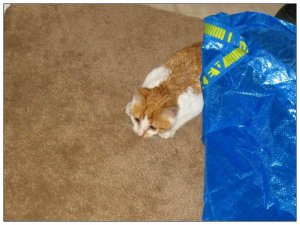 “The day before I was scheduled to move from an apartment to a townhouse, my boyfriend found a teeny, tiny kitten in the dumpster behind our apartment. There was about an inch and a half of rain water and he was huddled in a corner hissing at everything and everyone. I had to use a chair to boost myself into the dumpster. I wrapped him in a towel and carried him six blocks to the closest vet. He was 2.5 lbs. and the vet estimated him to be roughly 12 weeks old. He had no severe injuries, but he did have a respiratory infection and ear mites. The vet told me the cat was “feral” and that I should have “it” put to sleep because “it” would never make a good pet and I would be doing the cat a favor. He also tried to tell me the cat was clearly a calico. That was in 2008. Icarus/Icky (he fell out of the sky and into the dumpster…) is a playful, charming, loving cat. I never went back to that vet again. So very glad we didn’t listen to him.”

“Dali is named after Salvador Dali because of her beautiful white handlebar mustache! She came to us by way of the Blackford County Animal Shelter and her foster mom, Jo.  Prior to her adoption her name was Spunky Girl.  She got the original name because she is one very spunky girl!  She and her litter mate were thrown into a dog pen and although her litter mate didn’t survive, Dali did!  She can hold her own with any dogs or cats even though she is very small (barely 4 lb. at 9 mo.).  She looks for adventure everywhere she goes and now has a kitty sister and a dog sister and brother to play with.  Although she is spunky, she is also a little cuddle bug as well.  She has been with us only a short time & already rules the house and our hearts!”

“When we lost our two boxers we decided we wanted to go a see some boxer pups, this was before we found our two girls.  I found our little Sophie on Craigslist and contacted the lady who had her.  When we got to her house, poor Sophie was very skinny and covered in feces.  We didn’t take her that day, but my husband went back the very next day to pick her up.  The lady never gave her a bath, didn’t give  her her puppy shots, and told us she could hear.  Now Sophie lives in her forever home with us and she is very happy and healthy.  We love her so much; she has been our little miracle puppy.  See, we brought her home about a week before our two missing girls were found.  We believe that she was sent to us.  Sophie is one of a kind!” 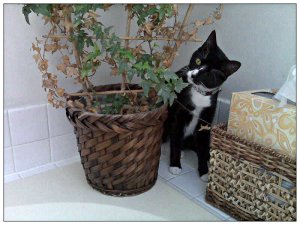 “I used to volunteer at the Philadelphia Animal Welfare Society (PAWS) and we were just ending an adoption event.  I went to go check out the remaining cats that did not go to a new home that day.  Katame was one of the few cats left and when he rubbed his face along the side of the cage, I realized why.  He only had one eye!  I knew he had to come home with me.  His name, “Katame”, means “one eye”, but we called him Tam (Tom) for short.  He came home on Thanksgiving Day and managed to squeeze into a panel in the wall and fall through to the apartment downstairs.  We found out from our downstairs neighbor that she had called the cops and the officer threw him out into the cold!  He had a collar on and everything!  It was a few days of me going absolutely insane that he finally poked his head out from a hole under a shed.  A rough start, but he quickly won his way into everyone’s heart that was lucky enough to meet him.  He played fetch and learned how to “sit” and was constantly amusing my family with his antics.  Unfortunately, Tam is no longer with us, as he had Feline Lower Urinary Tract Disease and after months of hospitals and suffering, we felt it best to let him go.  He was and always will be the best cat I’ve ever owned.”

At sit-stay-play In-home pet sitting & more.LLC, we always support and encourage our clients to rescue their pets if possible.  We have even teamed up with the Animal Rescue Fund (ARF) in Muncie, IN, to offer new owners of rescues a free introductory pet sitting service.  If you are looking to adopt a new family member, feel free to get in touch with us for some assistance.  It’s one of the ways we like to thank you for saving a life!

My name is Devi and I like to blog. Mainly about puppies, but once in a while I blog about my adventures and random thoughts too. View all posts by Devi D

This site uses Akismet to reduce spam. Learn how your comment data is processed.